The words balance and stability are freely thrown around in the training industry. Yet, they have two very different meanings and produce very different results. One of these qualities trains people to look like sloppy cooked spaghetti during their workouts. The other teaches individuals how to use their bodies in an athletic, strong, decisive manner. Let’s get clear on what these qualities really mean and why this distinction is important to make.

Well, speaking of athletic, strong bodies-it’s almost Olympics time! Ever notice how rock solid the trunk of a 100m sprinter is? How about when a gymnast waivers slightly after landing on the beam, but then locks back into a beautiful pose? That’s stabilization.

The sprinter’s thoracic spine and lower half move freely and explosively, while the core maintains rigid tensegrity around the spine. The gymnast flows from one stable position to another, using her tissues to correct any proprioceptive miscues. 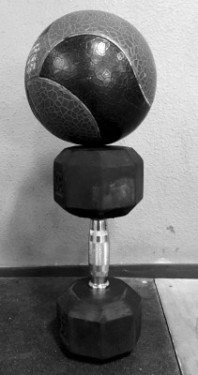 Balance involves arranging objects or your body in a manner that makes them stay put:

We can “balance” all kinds of things in different ways, as long as we end up with the object or person at rest (steady.) The object having zero net torque and external force on it creates this steadiness or “balance”.

But, here’s the kicker… The moment we get an outside force acting on this person or object, it becomes imbalanced. Ever seen the person standing on one leg wavering all over like a giant stork? They’re trying to create balance. Balance can be disturbed from something as simple as the wind blowing or opposing muscles taking turns being active. 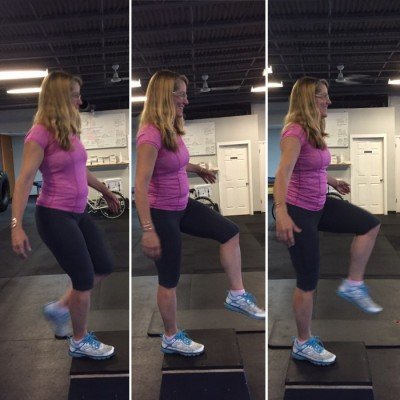 Here’s an example: this woman is passively balancing during a step-up variation. Notice the lax glutes and core, collapsing thoracic spine, and how the head and limbs are floating around trying to put her in the right spot:

Balance is delicate and so easily altered. That’s why it’s stabilization you want to focus on when training or competing-not balance!

Understanding how to stabilize-especially if you’re new to training-is extremely important. To create stability, gain control of your tissues. Proper breathing comes first, then core stabilization via the trunk and glutes, and on out to other joints. A chain is only as effective as its anchor. When an individual can stabilize the trunk, force can be transferred out to the extremities. The joints along the chain of action should be stable as well or force will be leaked along the way. Don’t just put yourself in the right position, stabilize it!

In this example, she actively uses her tissues to correct her faults. Her core is solid, glutes are active, eyes are focused ahead, shoulders are back, spine is aligned-she looks great! That’s stabilization. 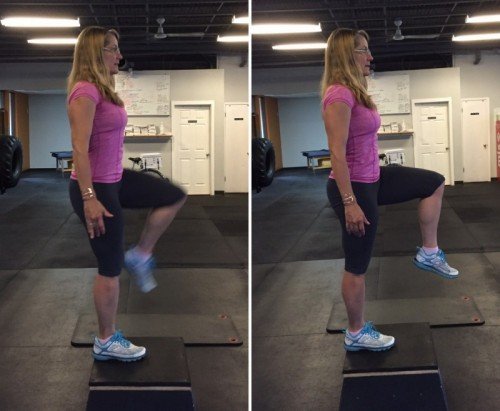 Stabilization is similar to balance in that it also involves arranging objects or your body so things stay put. The difference is stabilization requires those net torques and forces acting on the object to maintain that state of steadiness. (like when the tissues surrounding a joint cinch down around the capsule to stabilize it.) Because of the forces present on the object, there’s often a lot of potential energy associated with stability. And that potential energy prevents injuries, produces strength and speed. So when that slide-tackle comes in, you quickly dodge that snake on the trail, or you have to make a quick change of direction-be happy you actively trained stability-not balance.

Movement quality, health, and athletic performance require both balance and stability. Imbalanced bodies can make stabilization trickier, create movement dysfunction, and make us more prone to injury. To move well, be strong and injury free, we must be able to actively create stability. Active stabilization means purposefully firing tissues to create proper torque around a joint or sequence of joints. These stable joint sequences or “kinetic chains” enable us to transfer massive amounts of force along them, and turn the body into an extremely strong, effective unit.

The ability to take the body from a stable state, (high in potential energy) to a dynamic state (high in kinetic energy) is the essence of most athletic endeavors and numerous daily activities. Take soccer, basketball, football, or wrestling for example. All require stable positions (high potential energy) that transition into dynamic movements (high kinetic energy). In daily life, consider picking up groceries, standing up off the toilet, or brushing your teeth. Each involves a stable position and dynamic change of direction.

Okay, brushing your teeth isn’t the best example but it works and you see what I’m getting at here: Stability and balance are NOT the same. Stabilize, don’t balance. Use your tissues actively, not passively. When stability is properly established, health and high performance will follow.
-Nick